Haltom City Parks & Recreation has updated information regarding procedures and protocols for partial resumption of activities.

After many discussions and meetings that began over two years ago, it is with great pride that we announce our Haltom City Veterans Memorial is now open. A grand opening ceremony with over 250 in attendance was held on Veterans Day, Saturday, November 11, 2017. The Memorial is located at Haltom Road Park.

Haltom City Councilwoman, Jeannine Nunn, made the Veterans Memorial part of her platform and worked with a group of passionate citizens and staff members to make it a reality. Her objective was for this Memorial to be reverent, respectful and reflective to honor those men and women who have valiantly fought and died for our freedom. At the grand opening, Ms. Nunn stated “I am pleased beyond words” with the outcome.

A project of this magnitude takes a tremendous amount of participants and this project was no exception. From contractors to local vendors to committee and staff members, it truly was a labor of love that was put on the fast-track once the design came to life. Committee member and Haltom City resident, Steven Chapman, provided the original design that was developed and enhanced with the knowledge and expertise of architect and engineer Deborah Gagliardi, who provided her services pro bono. Fort Worth Civil Constructors went over and above the terms of their contract by not only using local vendors when possible, but fully embracing this project and giving it their personal attention with every detail. Despite delays from sub-contractors due to Hurricane Harvey, the Memorial, while not 100% completed on November 11th, was still magnificent and breathtaking. Final pieces will be added and the first phase of the Memorial will be finished before the end of this year.

The Veterans Memorial includes an impressive 30-foot victory arch with the names of the fallen from Haltom City. A water feature includes a 6,000-pound solid granite globe, with etchings of the world that rotates. This fountain was made possible by donations from a local resident, Bonnie Richards and her family. Encircling the fountain are seven granite pedestals representing each branch of the military as well as the Haltom City Police and Fire Departments. Stone benches provide seating around the Memorial.

City staff and committee members will begin working on phase two after the new year. It will include a Walk of Freedom, connecting sidewalks, parking, restroom, and a gazebo. We will begin a brick fundraiser to help raise funds to build this next phase.

To say this project has exceeded expectations is an understatement. Haltom City is humbled to be able to have this unique Memorial in our City. We hope you will take an opportunity to come visit this amazing new landmark that will be a part of Haltom City history for decades to come.

A very special thank you to our Committee Members: Layla Caraway, Steven Chapman, Don LeMaster, Jeannine and Gary Nunn, Jimbo White, and William Schott. Without your passion, persistence, and vision, this would not have been possible.

Please join us for the opening of the Haltom City Veterans Memorial on Veterans Day, Saturday, November 11, 2017 at Haltom Road Park. This park will honor all veterans as well as our Haltom City Police and Fire Departments.

The Haltom High School Jazz band will be performing at 10:30 a.m., with the official program starting at 11:00 a.m. Our local American Legion Post 655 will do the Presentation of Colors.

After the ceremony, the Berry Barry Band with Doug Rose and Jerry Audley will be performing from 12 - 3:00 p.m. There will also be bounce houses and food trucks.

We invite the community to come take part in this special day in Haltom City. 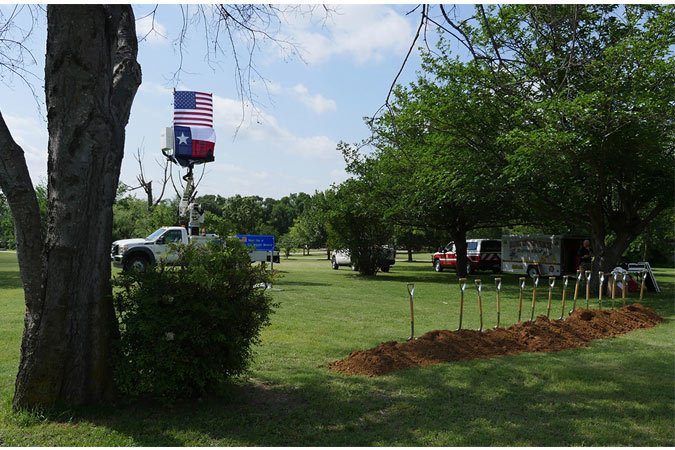 Construction will begin this summer on our Veterans Memorial at Haltom Road Park. This memorial will serve to honor the courage and sacrifice made by our veterans and first responders. A site dedication was held on November 11, 2016 and a groundbreaking ceremony was held on April 21, 2017.

Haltom City is currently accepting donations that will fund accents and amenities to the memorial, including a water fountain, gazebo, additional parking and a new restroom facility. There will be a fundraiser on August 26, 2017 at American Legion Post #655.

Donations can be made through a recurring deduction on the financial account residents use to pay their water bill or by making a one-time donation. A recurring deduction can be made by filling out this form and selecting the Veterans Memorial Fund. If you would like to make a one-time donation please contact the City Manager's Office at 817-222-7748.

It will be a place where citizens can come together to reflect on love of country and the price of freedom. A photo album is posted on our Facebook page and a video of the event is posted below. A groundbreaking will take place in spring, 2017.